Home
Blogs
Green Hydrogen
What are the 3 Main Types of Hydrogen?

The debate around hydrogen energy is getting more and more attention. Something which was a niche feedstock product serving heavy industry is now very much at the forefront of decarbonising the transportation and shipping world. Hundreds of billions of dollars are being invested into projects aimed at helping achieve net-zero targets and creating zero-emission fuel. Against that backdrop, let’s take a closer look at the different options available. 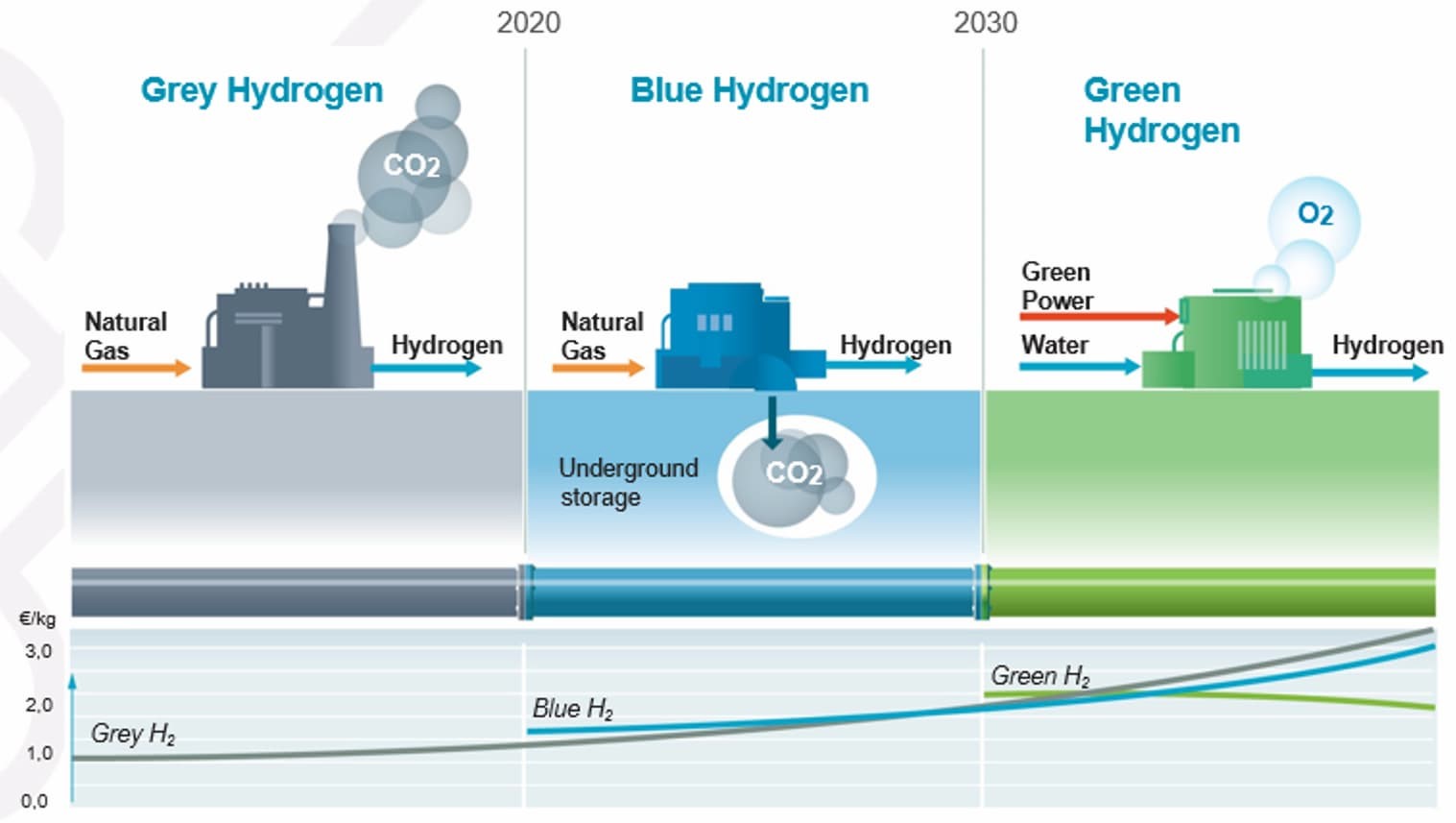 The most common form of hydrogen, it’s created from fossil fuels and the process releases carbon dioxide which is not captured. The process used to create hydrogen from natural gas is called steam methane reforming (SMR), where high-temperature steam (700°C–1,000°C) is used to produce hydrogen from a methane source, such as natural gas. In steam methane reforming, methane reacts with steam under 3–25 bar pressure (1 bar = 14.5 pounds per square inch) in the presence of a catalyst to produce hydrogen, carbon monoxide, and a relatively small amount of carbon dioxide. Steam reforming is endothermic — that is, heat must be supplied to the process for the reaction to proceed.

There is also a gasification process which uses coal as a feedstock, creating brown hydrogen, which also releases carbon dioxide and can be put in the same category as grey. The head of business development at the renewable energy giant Enel has described hydrogen as a “climate killer” as it stands right now due to almost all of it being grey: “98% of it is produced from steam reforming and gasification, which equates to yearly carbon emissions comparable to that of Indonesia and the UK combined,” he said. “Just 2% is produced from electrolysis.” Clearly then, grey hydrogen is not a long-term solution. 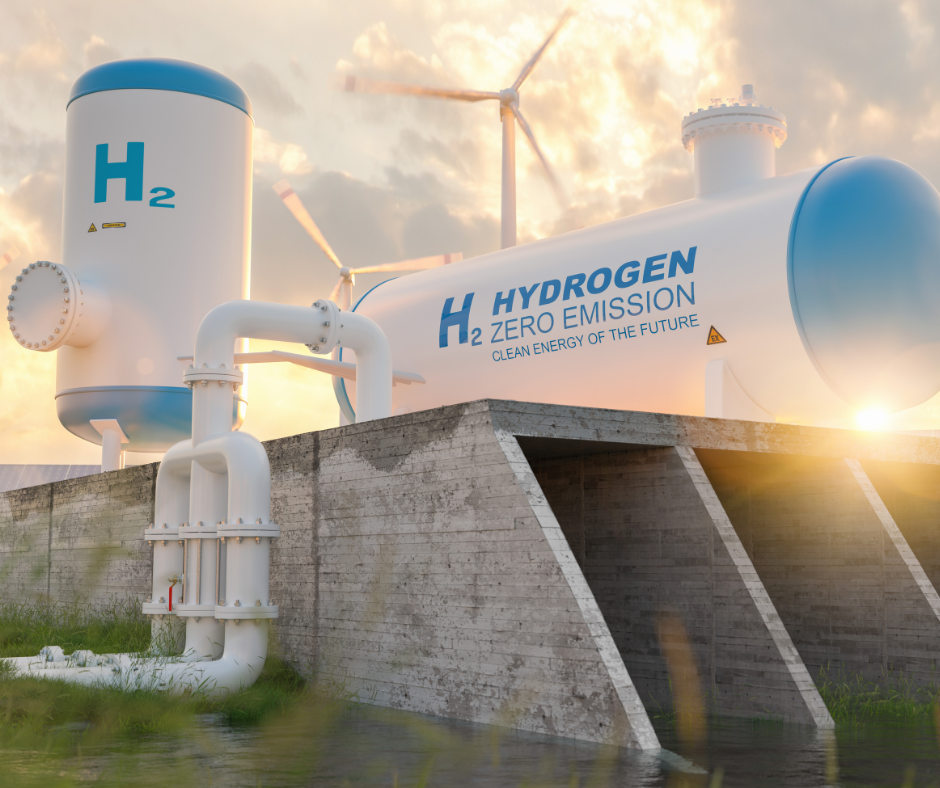 Blue hydrogen uses the same process as grey, except this time the carbon is captured and stored. This makes it much more environmentally friendly, but comes with added technical challenges and a big increase in cost. Carbon capture and storage (CCS) has been around a while, with the technology being used by heavy industry and power generation companies burning fossil fuels.

The technology can capture up to 90% of the CO2 produced, so it isn’t perfect but clearly a massive improvement. Most of the time, this CO2 is then transported by a pipeline and stored deep underground, often in salt caverns or depleted oil and gas reservoirs. Countries which do not have access to such underground options will find it very challenging to establish a blue hydrogen industry, and it may be more cost-effective to develop green hydrogen as their primary solution.

When it comes to hydrogen production, blue hydrogen is often seen as a stepping stone from grey to green, and it’s proven to be divisive among industry professionals. On one hand, it is relatively easy to scale up from existing grey hydrogen production and requires less electricity. It is also not dependent on the rapid & continuous growth in renewable energy sources such as offshore wind & solar. On the other, think tanks and green hydrogen advocates argue that blue hydrogen goes against the goals and principles of net-zero, as well as being more expensive than green in the medium term.

The utopian vision of the future is a net-zero world where all our electricity and fuel is produced by emission-free sources. In the context of this piece, that means a fully-scaled green hydrogen industry on a global scale. It has the potential to be a major part in solving the intermittent generating capacity of most renewable energy sources. Excess electricity can be used to create hydrogen, which is then stored as a gas or liquid until needed. It faces many challenges, but the momentum behind it is growing with governments around the world recognising the potential benefits and developing policies to help drive development and adoption.

So, what exactly is green hydrogen? Rather than using fossil fuels, green hydrogen is made by using a process called electrolysis to split water into hydrogen and oxygen. If that process is powered by a renewable energy source, such as wind or solar power, then the hydrogen is referred to as being green. 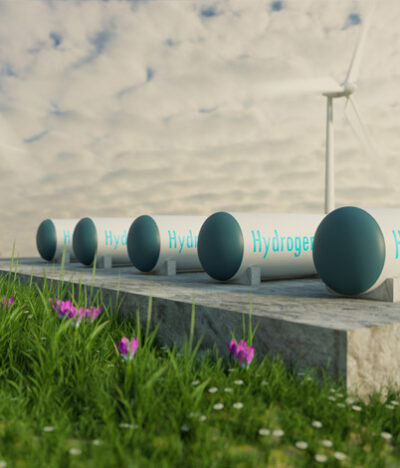