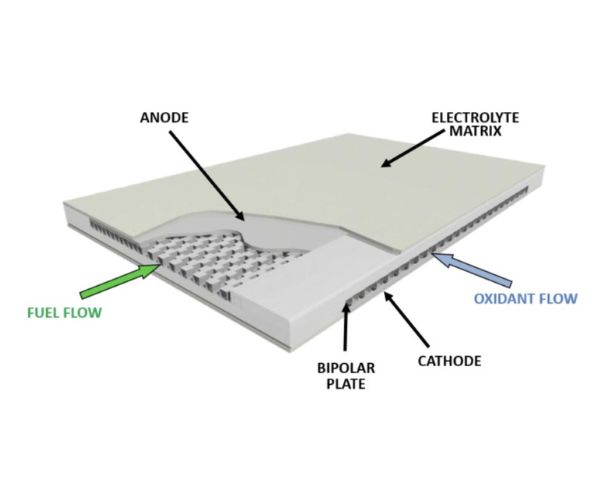 A fuel cell is a device that makes electricity from fuel and air. Instead of burning the fuel to make heat to drive a mechanical generator, fuel cells react the fuel and air electrochemically, without combustion. The electrochemical approach avoids pollutants that are created by high flame temperatures, and it is a more direct and efficient way to make power from a fuel. Fuel cells are configured in stacks of individual cells connected in a series. Fuel Cell Energy’s carbonate stacks have up to 400 cells per stack and produce between 250 kW and 400 kW of power. Fuel Cell Energy’s standard MW-scale module contains four stacks, nets around 1.4 MW of power, and can make electricity for sites like universities or hospitals. Fuel cell technology has powered everything from laptops to space shuttles. The modular design of fuel cell plants lets them scale up to a site’s energy needs. In South Korea, one fuel cell park produces 59 MW of power.

A fuel cell power plant is made up of one or more fuel cell modules. The plant also has electrical and mechanical systems that deliver gasses to and from the stack module and to convert the DC fuel cell power to AC power at the desired voltage. The small footprint, quiet operation, and clean emissions profile make them ideal for highly populated areas. Fuel Cell Energy’s plants are designed to be safe, clean, reliable, and highly efficient.

How does a fuel cell work?

The electrochemical reaction of oxygen in air consumes electrons. Connecting the two produces the current of usable electrical power. All fuel cells contain a layer between the electrodes called an electrolyte layer.

Carbonate fuel cells operate at a relatively high temperature, about 1000 degrees F. Operating at high temperature allows the electrode reactions to proceed efficiently without expensive platinum-type catalysts. It also is a high enough temperature that allows the conversion of methane to hydrogen (called reforming) in the fuel cell stack. This allows the cell to generate hydrogen directly from a methane-based fuel source like natural gas or biogas. Availability of natural gas and biogas makes fuel cells an attractive energy solution.

Once methane is converted to hydrogen inside the cells, the hydrogen is reacted to produce electrons, as described above. The reforming reaction also produces carbon dioxide. The high efficiency of fuel cells mean they emit less carbon dioxide per kWh of power generation than other fuel-based power systems, and if the fuel is biogas the power is carbon neutral. The fact that the carbon dioxide is produced in the fuel electrodes before being mixed with diluting air means that it can be easily extracted before being exhausted, to avoid the emission or to provide carbon dioxide to a user as an industrial gas. Green energy for a clean earth